Terry on the Santa Monica sidewalk

I was walking in Santa Monica (I walked a lot which is odd in LA ) and I looked down – it was around 10th and Washington I think – and to my amazement I saw the name Terry written into the concrete. At first I thought maybe the sun had got in my eyes and I was seeing things. I took my glasses off and crouched down to look at what must surely be a mirage. There it was. T E R R Y – I felt so safe. Years ago I remember seeing quite a cheesy chic flick film Fools Rush In (which you would have hated!) with Matthew Perry and the woman he falls in love with, Salma Hayek, tells him that there are signs everywhere. The secret is to see them. Most people don’t look for them, let alone see them.

Perhaps that wouldn’t be so weird as a one off, except that I saw it again a week or so later. I had walked for 2 miles to exactly the same spot. In an area of Santa Monica I don’t know well.

Thanks Salma. I owe ya. 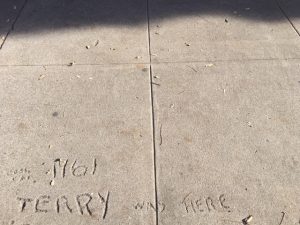 Darling Terence: a comedian’s letters to the love of her life

On Wednesday 28th November my husband, who was also my manager passed away. He was being treated for cancer at The Royal Marsden. He was the true love of my life. I wanted to start a blog to put down my own raw feelings of grief and the experiences I have had that may help others going through their own personal journey. The posts aren’t in any order but I hope one day to publish them as a little book for people to read and to get some comfort from.